Welcome to the world Josiah!! 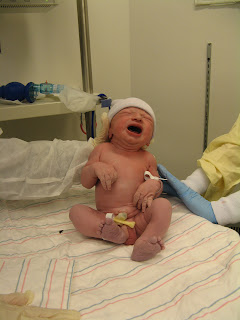 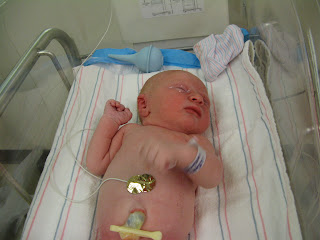 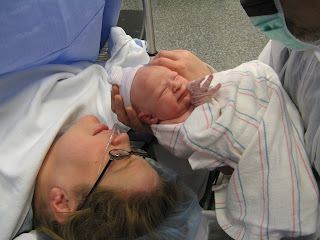 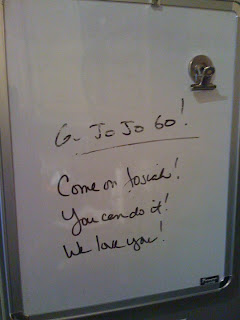 I had another NST (non-stress test, which is just being put on the fetal heart monitor) today. Once again, they said he was responding and doing everything perfectly. When I asked Dr. Powell if they were going to start checking on dilation and effacement she said, "since you are having a c-section, we really don't care!" Hahaha. If anything were to change or if I wanted them to, they would check, but at this point it really doesn't matter. If I go into labor they will go ahead and do a c-section. Dr. Powell said there's just no reason to be invasive or cause any unnecessary stress to me at this point.

I feel good. Ok, not really. I feel tired and really uncomfortable, but mentally, other than tired, I feel good. :) I feel like Josiah is really ok for the first time since Dec 6th.

We have most everything ready. All of his newborn clothes and most of the sheets, blankets and diapers are washed. We still need to install the carseat, but the room is mostly ready. Plus he won't be sleeping in there much to start with anyway. Squeakie has been evicted from the master bedroom and we've stopped letting the cats into the nursery since everything has been washed. Of course one sneaks in for a few minutes every now and then, but mostly they are gone. Christmas is coming and I have so much for which to be grateful. Wonderful friends, amazing family. I'm so glad Mom (Emmy) and Claude (Pop-pop) and Aunt Jenny are spending Christmas here in Durham with us, so we can all be together, comfortably (I hope anyway, for them) and I don't have to travel 3-4 hours to the Outer Banks when Josiah's eviction is imminent.

December 30th, here we come!
Posted by Unknown at 8:39 PM No comments:

Some of you may know about this, but I haven't really wanted to discuss at length with anyone because I've been scared, so I haven't written about it. On December 6th I had a routine ultrasound for a growth check. Since all of our previous appointments and ultrasounds had gone so perfectly I told Boomer not to even bother to come with me. So of course this was the only "bad" report we've had the whole pregnancy. Apparently Josiah hadn't grown any since the last growth check. Dr. Bird basically told me, "don't be too concerned yet". What no one bothered to tell me was that he scored an 8 out of 8 on his BPP (BioPhysical Profile), which is as good as it gets. They also didn't tell me that ultrasounds are not 100% accurate or that growth checks should not be done closer than 3 weeks apart (my last one was only 2 weeks before this one). They also didn't tell me it wasn't terribly uncommon for babies to quit growing. I just found out my niece, Mackenley, stopped growing at 34 weeks and she was born tiny but perfect, and is a wonderfully healthy 11 year old now.

So, this news, don't get me wrong, it worries me, but since December 6th we've had 2 appointments per week and everything has been fine. I go on the fetal heart monitor (called an NST, non-stress test) at the beginning of the week and have an ultrasound at the end of the week. His NSTs have been perfect, but supposedly he still hasn't grown. I type "supposedly" here because on December 6th I asked the sonographer if maybe his growth had stopped/slowed because he was out of room in my womb. She told me no, he still had plenty of room. When we had the last ultrasound this past Friday, Dec 17th, I asked if he still had plenty of room. This time she told me that no, it was tight. Now, I'm not a medical professional, but I don't think my uterus has shrunk. So if he hasn't gotten any bigger why are his quarters getting close?

Anyway, I've been told he's about 5.5 lbs now, but they can't give me a length. He is doing everything he's supposed to be doing, like practicing breathing, and his cord looks good. I'm trying not to be too concerned because I don't think stress hormones will help him.

I'm having a c-section at Durham Regional on Thursday, December 30th. Less than 11 days! I'm so ready, and so not. I'm also about as uncomfortable as I have ever been in my life. I really don't understand how any woman can enjoy being pregnant, especially the 3rd trimester. I limp and waddle everywhere. I have to pee all the time. Everything hurts, and just 2 days ago I started having these shooting pains in my unmentionable areas which are, come to find out, totally normal and due to his head being pressed up against some pelvic nerve. I ask you, is this something one can enjoy? Luckily, bitching about it helps. :) As does keeping my eye on the prize! In 11 days I get a wonderful baby boy and that's worth anything and everything.

Now go call the schmaltz-police.
Posted by Unknown at 5:19 PM No comments:

This morning shortly after I was cleaning up some water Huggy knocked off my nightstand my stomach really started hurting. I thought it was some sort of gastrointestinal issue and confused nausea with just lots of pain and went in to see my docs. Turns out, Josiah has split my stomach muscles a bit. It's not rare or life-threatening or anything. Just extremely uncomfy. http://www.nlm.nih.gov/medlineplus/ency/article/001602.htm

In other, GOOD, news, Josiah is perfect. They put me on the fetal heart monitor for about 20-30 minutes today and he moved around a lot and his heart rate went up and down, between about 128 and 178. I was, of course, alarmed, considering whenever they doppler me his rate is always mid 150s to low 160s, but that's apparently a slightly different way to measure it. When I asked about his big fluctuations they said it means he's a "REALLY good baby, and we love good babies". :)

Really, I can deal with anything as long as Josiah is ok.
Posted by Unknown at 7:30 PM 1 comment: