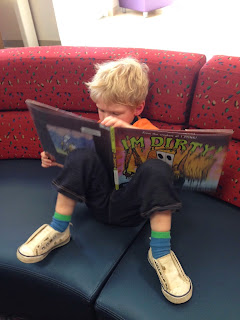 Posted by Unknown at 3:02 PM No comments: Josiah had his 3 year well-baby check today. No shots! Well, he would have gotten a flu shot if they had any available, but they did not. He is 37ish inches tall (he wouldn't stand up straight) and with a wet diaper and heavy wool on he's 28.4 lbs, so probably he's just under 28 lbs. He did well. No fussing. He's way beyond his milestones mentally, but physically there are a few things we need to work on. She (his doctor) wants us to work on him dressing himself, and using utensils more. I'm not that concerned with this because I figure at some point he's got to figure it out. Surely I won't be dressing him for high school. But we'll be working on it, definitely! She did not mention him not being fully potty trained and I know he's still well within the normal range for that. But we're working on that, as well!

So, what can Josiah do now that he's 3? Well, he knows the whole alphabet, of course. We're working on learning it backwards, even. He can spell a bunch of words but that's not reading, just memory. He knows what letters words start with and we can often sound things out together. He knows all his colors. He knows all the planets but he doesn't really understand what planets are. He'll say things like "Jupiter will not hurt me." He knows Pluto used to be a planet and we're a little sad that it lost it's planet status. :) He knows all the days of the week, months of the year, and all the states in alphabetical order. He can place most of the states on a map, too. Next we'll be working on capitals. He can count to 100 and then to 1 trillion by adding 0s (100, 1000, 10,000...). We're working on the smaller numbers after 100 now. He can add and subtract under 10 and that's not just memory because the other day I asked him out of the blue what cinco plus dos is and he thought for a second then yelled, "Siete!" Previously we had not worked on adding in Spanish so I think he "gets" the general concept.

He's not big on drawing or coloring and can't draw any letters or numbers except O, I, Q and 1s and 0s. I like to joke he's writing in binary. But honestly he's just not been interested in drawing anything much. Emmy (my mom) gave him some stamps for his birthday, though, and he loved playing with them tonight. He loves Play-Doh but this is a new discovery. We'll be playing with this more soon.

As for the potty, well, several times now he's told me he has to go, and then does! It's amazing, but it's not remotely consistent. We're not pushing it AT ALL. Again, I figure he won't be in diapers by high school.

Seeing your child struggling to do something is really hard and I know both Boomer and I have been guilty of helping him when we shouldn't have. Now we are being especially careful about never ever stepping in to do anything for him that he thinks he can do himself. Unless, of course, we're in a big rush. But in general we're both taking a step back and letting him do for himself. I imagine this previous "too much helping" accounts for a lot of why he can't dress or use utensils well. I guess if that's our biggest mistake we'll be doing ok.

He's a really funny kid. I'm guessing all toddlers are but he's the only one I live with. I mean, he cracks me up every day. Some of my favorite quotes and chats are here: http://firstpancake.tumblr.com/

Not to be too schmaltzy, but he's an amazing kid and I feel so blessed every day. Even days when he pushes all my buttons I feel blessed. Ok, those days I don't feel blessed until after he's asleep, but still. I just never knew I'd have such a funny, brilliant, beautiful little boy. Like the song says, somewhere along the line I must have done something good.
Posted by Unknown at 11:57 PM No comments:

http://youtu.be/r3ZIkBGhECw
Posted by Unknown at 9:45 AM No comments: 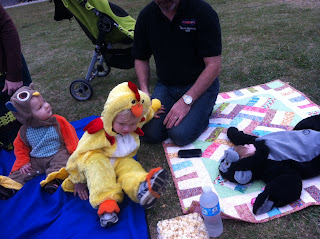 "My taxes and take-home pay mean more than your fundamental civil rights, the sanctity of your marriage, your right to visit an ailing spouse in the hospital, your dignity as a citizen of this country, your healthcare, your right to inherit, the mental welfare and emotional well-being of your youth, and your very personhood."

As I sat with my friends today at a Food Truck Rodeo in Durham this was brought home to me once more. I was watching my son between 2 beautiful little girls and their 4 loving mothers and I thought how much it sickens me that 2 of those mothers have little more right, under current NC law, to their children than I have to their children. These women are not even allowed to be classified as legal guardians. Sure, there are some legal protections in place, but they are not infallible. All it would take, in the case of the death or incapacitation of the birth mother, would be a nasty family member out to take their child away to do some serious damage.

I joke sometimes about how we need more straight friends, but we have plenty of straight friends, and plenty of gay friends, too, and the truth is, while it was delightful to my liberal heart to start with to be able to count among my nearest and dearest so many gay people, now they are just people, just families, just other parents doing the best for their kids that they can do.... just like Boomer and me. I forget how tenuous their situations are because honestly, we don't sit around and discuss our big "liberal gay agenda" when we're together. Generally we're discussing baby sleep issues, eating, milestones, diapers, where to eat next, the latest gossip (ok the truth is lesbians do gossip less than straight girls), or some other mundane stuff. They.... we.... don't want to take anything from the conservatives. We just want the same rights everyone who was born attracted to the opposite sex enjoys so freely.

But their situations are tenuous, and untenable. When I try to imagine being in their shoes it scares the hell out of me. I hope that no one we love is going to do anything to make things worse for them.

And if you plan to vote for Romney I hope my child never finds out that someone he knows, or worse, loves was on the wrong side of history. I'd like to say I want you to look him in the face and tell him that his friends and their families aren't as important as his and don't deserve the same rights and protections. I'd like to say that, but I think once he was old enough to understand, that would just break his heart. Because we're not raising him with hatred or discrimination. And I hope he never finds out that you were complicit in this barrage of homophobia coming from the right wing in this country right now. Just as it would break my heart to find out my grandparents or anyone I love voted for George Wallace.

No matter your reasons, if you vote for Romney you are complicit in massive civil rights violations perpetuated against people Josiah loves.
Posted by Unknown at 11:38 PM No comments:

You can vote every day! Share widely!
Posted by Unknown at 10:40 PM No comments: 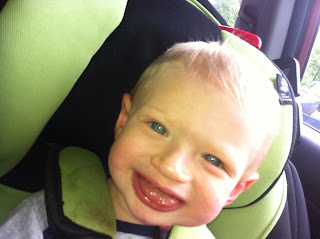