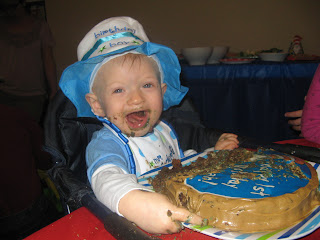 I can't believe my baby is ONE. I know I have stated this before but I feel like I JUST had him, and that he's been with us forever, all at the same time. He's such a happy, easy baby (except when travelling) and I feel very blessed.

His birthay party was such fun! So many friends and family: Emmy, Jenny, Kimi, Rich, Frankie, Loli, Clare, Alex, Evie, ZieZie, Popster, Bubbe, Pops, Eric, Paul, Rebecca, Melissa, Henry, Arwen, Livia, Nelly, Viv, Rachael, Rhiannon, Leigh, and of course Josiah, Mommy and Daddy! I think that's everyone. I'll probably have to edit this later. He got so many toys that I think we're going to have to put some up in the attic for later!

Thank you to everyone for attending, or sending gifts, or just wanting to attend, and thank you all for being part of his first year with us. It's truly been a wonderful ride.
Posted by Unknown at 4:01 PM No comments: