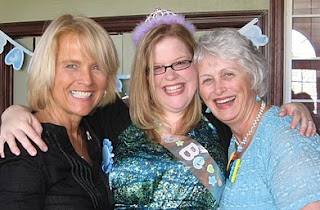 We missed Centering last Tuesday! We thought it was this coming Tuesday. But now we have all the dates in our calendars. :) However, I have been to see Dr. Frenduto a couple of times. My feet were very swollen and I have been having a lot of pelvic pressure. Turns out, Josiah is head down (as he should be) and his head is sitting right on my cervix, which Frenduto tells me is normal. He acted like it was something that would come and go over the next couple months, but so far I've only had a couple hours of reprieve in the last 5-6 days. Most of the time it's merely uncomfy. Sometimes it makes me cry a little. I really hope it's not going to be like this for the next 2 months, but I suppose even if it is, the outcome will be worth it. Laying down helps so I've been doing that a lot. Standing for long periods makes it almost unbearable.

I also managed to get a pretty bad case of bronchitis a couple weeks ago, but I'm all done with that now!

On a happy, non-sick note, I had my first baby shower! It was the family/old friend shower in Elizabeth City given by my 2 moms, though some new friends were there too, like many of Mom's (MLW) Literary Divas. It was a wonderful shower. Many of the women told me it was the best baby shower ever. We received some awesome gifts and the fellowship was even more amazing. There was so much laughing that I may not have been the only one who needed a diaper!

Josiah is moving like mad quite often. Many times I feel him on my far right and far left at the same time, making me think he's practicing some sort of drumming, or possibly soccer kicks. When Frenduto was trying to doppler him to get his heart rate he kept laughing and saying, "he's kicking me!" I told him he does that to me a lot too. :)

All in all, I think things are going ok.
Posted by Unknown at 9:42 PM No comments: