Today's Centering class was good. My glucose and protein were perfect once again. My BP was a little high and my weight was down about a pound since the class last month. But Michelle (the PA who leads the class) said she wasn't concerned because Josiah appears to be growing as he should. My fundal height measured at 26 weeks instead of 25, which is not unusual. She said if it was more than 2 weeks off they would do another ultrasound to re-check. Josiah's heart rate was around 160.

And speaking of another ultrasound, I get one on October 5th. YAY for being "high risk" and getting lots of extra ultrasounds. I also have to start having one-on-one baby doctor appointments once a month, as well as Centering, so basically I get a check-up every 2 weeks. For those of you who know how anxious I am, you know this is a very good thing. Constant reassurance! I'll also talk to the doctor then about scheduling the c-section.

I am greatly reassured after talking to Michelle, who is Jewish, about the brit milah (bris). She asked Boomer who he found to do it, and when he told her Adelman she said "He's the best. That's who did my son's bris. I had a urologist present at the ceremony and he said he'd never seen any circumcision done so well." This was quite comforting to me, as you can imagine.
Posted by Unknown at 8:51 PM No comments: 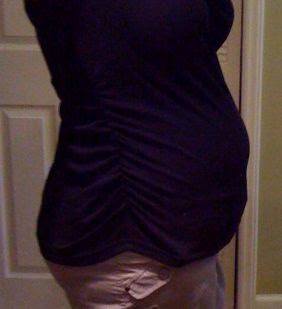 And there he is!

I was at Lane Bryant today getting a new, well, let's call it a support device, and I told the woman I needed some better support because I was pregnant. She looked at me and said, "you don't look pregnant!"

I have to admit, I hate not looking pregnant. I just feel dumpy and I figure people just think I AM dumpy. I WANT to look pregnant, dang-it. I need something to show for the misery that was my first trimester. Though I must admit that it's gotten a lot better lately. I never got a JOLT of 2nd trimester energy that so many women promised me, but I am not nearly as tired as I was.

I wasn't really expecting the sudden ability to vomit at will, but hey, everyone has to have a superpower.
Posted by Unknown at 5:47 PM No comments: