I write this post in a sort of response to http://www.blogher.com/why-i-made-kidfree-list-twitter-and-what-happened-when-i-did and it's totally dedicated to SP.

As Elizabeth Gilbert wrote, I believe that having children is a bit like getting a tattoo on your face... you better make sure it's something you REALLY want before you do it. I JUST had my first (and only) child and I'm about to turn 38. This was not because I spent 20 years trying to conceive. I spent one glorious evening trying to conceive before it actually happened (which was a big surprise to me considering I am the aforementioned almost-38).

My point is, I know exactly what it feels like to be over 30 and childless by choice.

One of my little sisters started having children before she was 25 (not that there's anything wrong with that!). I'm the oldest in my family so I was already 32 when my first niece was born. When I interacted with her I was told what a wonderful mother I would make *wink wink nudge nudge*. I felt judged by mothers (not my family, I just felt like a bit of a disappointment to them) and got the same reactions as the blogger above when I would explain that no, I didn't have children and that no, I didn't actually, at the time, think I wanted them. What was wrong with me? What was wrong with my husband? Couldn't we have kids? Didn't we like kids? Truth be told, my husband loves other people's children... me, not so much. Especially when they are running screaming through Wal-Mart or throwing a temper-tantrum in a restaurant where I am trying to enjoy and digest food. Since I have had my little monkey my views on this haven't changed. I'm still not all that fond of other people's children. And Josiah will never scream in a Wal-Mart or restaurant for more than the few minutes it takes to remove him. But again, I digress.

One of my pet peaves was being told I didn't/couldn't understand something because I didn't have children. I don't understand unconditional love? Puhhlease. I'm the oldest of 5 sisters. The youngest is almost 12 years younger than I am. I would lay down my life for any of my little sisters ANY day, even the one I no longer communicate with. I would actually say that being the oldest daughter in a family gives a unique glimpse into motherhood that maybe others don't get, with ALL the heartaches and heartbreaks for those "little girls" that any mother would feel. Maybe there is something wrong with me, but I do not actually feel any differently towards my son than I do towards my little sisters, with the exception that I have more control over how I interact with him.

I felt judged and a bit like "you aren't part of our club" before I had Josiah, and once I was pregnant, and then had him, felt included, but for reasons with which I just disagree. Because there is something now I magically "understand" that I somehow couldn't before, because I was lacking something? How does popping out a kid and going without sleep make me more of a person or better able to understand anything? Good lord, I can't understand anything anymore because of extreme Mommy-Brain! I love Josiah with all of my heart, but he does not make my life worth living or worthwhile. If you don't have anything to live for before you have kids then I would respectfully suggest maybe you don't need to be having kids.

But really, the judging doesn't stop. When I was pregnant we decided to cloth diaper. Very few people simply said, "Dude, that's awesome. We did that too." or "We wish we'd done that." or just "Good for you!" I would say the typical response went something to the effect of "why in the world would you want to do that? That will last about a week. Here are some better options for you if you want to be greener. Cloth diapering isn't actually better for the environment, here's a link to a report sponsored by the disposable diaper industry." Judged.

When I was pregnant, due to extreme tokophobia where I would actually break down and start crying and shaking every time I thought of giving birth, we decided on a c-section. Oh boy. You would not believe the number of women, even my pro-choice sisters (metaphorical sisters, not actual ones), who judged me on that one.

BUT, let me give you one better than this c-section judging I got... I have a friend who knew her whole life that she would have her child naturally. No epidural, no nothing. To that I say YOU GO GIRL! I'm actually jealous of this decision and wish I could have made it for myself. Ok, not jealous, just envious. I think it's wonderful! And who would judge her, right? I mean, NATURAL. What's better than natural?? Apparently when she told people she was going to have her child naturally that got all sorts of panties in a twist. She said it was so bad she actually just stopped telling people and went on about the business of having her beautiful child naturally. Again I say YOU GO GIRL!

I'm not even going to go into our decision to circumcise and some of the things I have heard on that one.

One might think that now that I've had Josiah (even if the way I had him and the way I am diapering him and what we did to his penis is undesireable to some/most) and am in "the club" that I would be safe, right? Oh no, it's quite amazing how many times I've been told I'll change my mind and want another child. Or, why don't I want another child...? Don't I like being a mother? Don't I like children.............?

The judging never stops, except it does stop here. As long as you aren't hurting anyone else, you do what makes you feel good and comfortable. Don't want kids? Awesome! You really shouldn't have them if you really don't want them, so more power to you for NOT! Against abortion? Awesome! Don't have one! What are you doing to make them less abundant? Supporting real sex education in schools? Supporting free birth control to teens? Supporting programs like WIC, etc, for poor mothers who decide not to have abortions? Awesome! Want a c-section? Awesome! More power to you. I LOVED my c-section. Seriously. Loved it. Want a natural birth? Awesome! You should have one! Get empowered and educated to take control of your own birth. You should have the birth you want. Your child will not remember but you will. Want to cloth diaper? Awesome! Contact me, I can help. It's not as complicated as it might seem when you start googling. Want to use disposable diapers? I support your right to do so and will not judge you, I promise. I will just ask that you educate yourself a little about your choice and make sure it's what you really want to do. For instance, did you know I never use diaper cream (or anything at all) and other than when Josiah was in the NICU and got a rash from the disposables he had to wear there, he's never had a diaper rash? Want to wear your baby or co-sleep? I think that's awesome and a great way to be. Don't want to do those things? I also think that's awesome. Your baby isn't going to suffer because you don't hold it 100% of the time and sleep in the same bed with it.

I would say that we spend both too much time and way too little time worrying about other people. As long as what I am doing doesn't hurt anyone why do you want to change it? Why don't you worry more about how I'm feeling as opposed to what I'm doing? Trying to change something that isn't hurting anyone isn't going to make the world a better place. Wanting people to be happy and treating them in a way that will accomplish that WILL make the world a better place. Next time you start to question, and judge, someone's choices I would just ask that you ask yourself, first, what it will accomplish. If "nothing" is the answer then please just keep it to yourself.
Posted by Unknown at 6:51 AM 3 comments:

Waiting at the doctor's office... 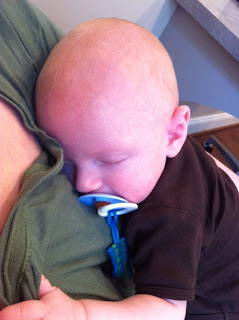 Right now we are waiting at the doctor but so far today we have found out that Josiah is 24.5 inches long and 12.5 lbs.
Posted by Unknown at 4:35 PM No comments: