Boomer and I had our first Centering Pregnancy class today. I peed on a stick to test glucose and protein and both were normal. My weight was up from the last visit but still down from my starting weight. My blood pressure was 131/68... top number a little higher than normal, but I don't do well in group situations, so slightly higher was to be expected. And the baby's heart rate was 161, also up from last visit, but still normal and to be expected, since Mom was agitated. :)

I don't enjoy those getting-to-know-you "fun" things that groups do, but I got through it. Boomer made a frenemy in the guy next to him by discovering that he's a Red Sox fan. The doctor who led the group is from NY and had lived in Brooklyn, so of course Boomer discovered that she actually lived 3 blocks from him in Bay Ridge. Everyone was very nice.

Most of the couples in there were pregnant with their first child. One couple was having their third! Yikes.

Most were due after me, some as late as early Feb. Most were not showing either. I'd really like to start showing instead of just looking dumpy.

I'm feeling better, less tired, though my back and knees are really hurting. I'm going to a chiropractor for the back issues, and will talk to my doc one-on-one about the knees. I think I just really need to get back to water aerobics. More soon.
Posted by Unknown at 1:10 PM No comments: 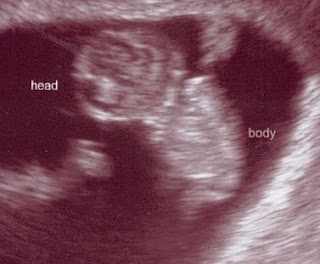 Something I never thought would happen is happening and it's still very surreal. I see the sonogram pics. I even see it moving during the ultrasound. I heard the heartbeat today. But still, I can't say it's quite sunk in all the way that there's a baby in there. And lord have mercy, how is it gonna get out? Not in a natural way, I can tell you that. I know I have said it before, but let me say it again.... I'm 37 years old, you just don't come back from that at my age! I would like to be able to use my parts again, thankyouverymuch. No, I feel no need to "experience childbirth", and no, you aren't going to change my mind. No offense, but I know where they come out.


So today at the doctor I heard the heartbeat. It was very nice. I'm sad I heard it for the first time alone, but I suppose these things happen. At least I'm not really alone. Of course the heartbeat was right smack dab in the middle of the range, so no indication of sex from that. It was 142 bpm. Very fast (for an already-born human anyway)! I hope it's not as anxious as it's mother is. I know, I know, it's supposed to be that fast. I measured 14.5cm from top of pubic bone (I think that's what she measured from and what she called it... anyway, from top of my "area") to top of my uterus, which the midwife told me was exactly dead-on of where I'm supposed to be. So, GOOD JOB BEING AVERAGE BABY BAKALCHUCK! I'm down with average right now.... we're shooting for normalcy after all. I'm sure s/he'll be exceeding my expectations soon enough.

Let's see, what else? Oh, I'm going to be doing CenteringPregnancy, which I am very excited about. Basically once a month I meet with a midwife and 5-9 other mothers/couples who have similar due dates. In addition to increased satisfaction, research has shown that women in CenteringPregnancy have 1/3 lower relative risk of having a preterm infant than women in traditional care. My first "class" with CP starts July 27th. I need to be there between 8:30-8:45a for my finger-stick AFP test. We actually begin the CP at 9am. I should have a partner, but it's not 100% necessary. It can be a different partner each time (I asked, of course).

I was down 5 pounds from when I was weighed at Duke for the First Trimester Screening on the June 24th, but no one seemed too excited about that. In fact it wasn't brought up at all, so that's good! I supposed I should mention those screening results here so we have a record of everything in one place:

Before the screening I had a 1 in 300 chance of having a trisomy baby (another chromosomal mutation that causes retardation). After the screening my chances dropped even more dramatically to 1 in 5800. So.... YAY!
Lastly, we find out the baby's sex on Wednesday, August 11 at 4:15pm. So the count-down is on!
Posted by Unknown at 7:50 PM No comments: