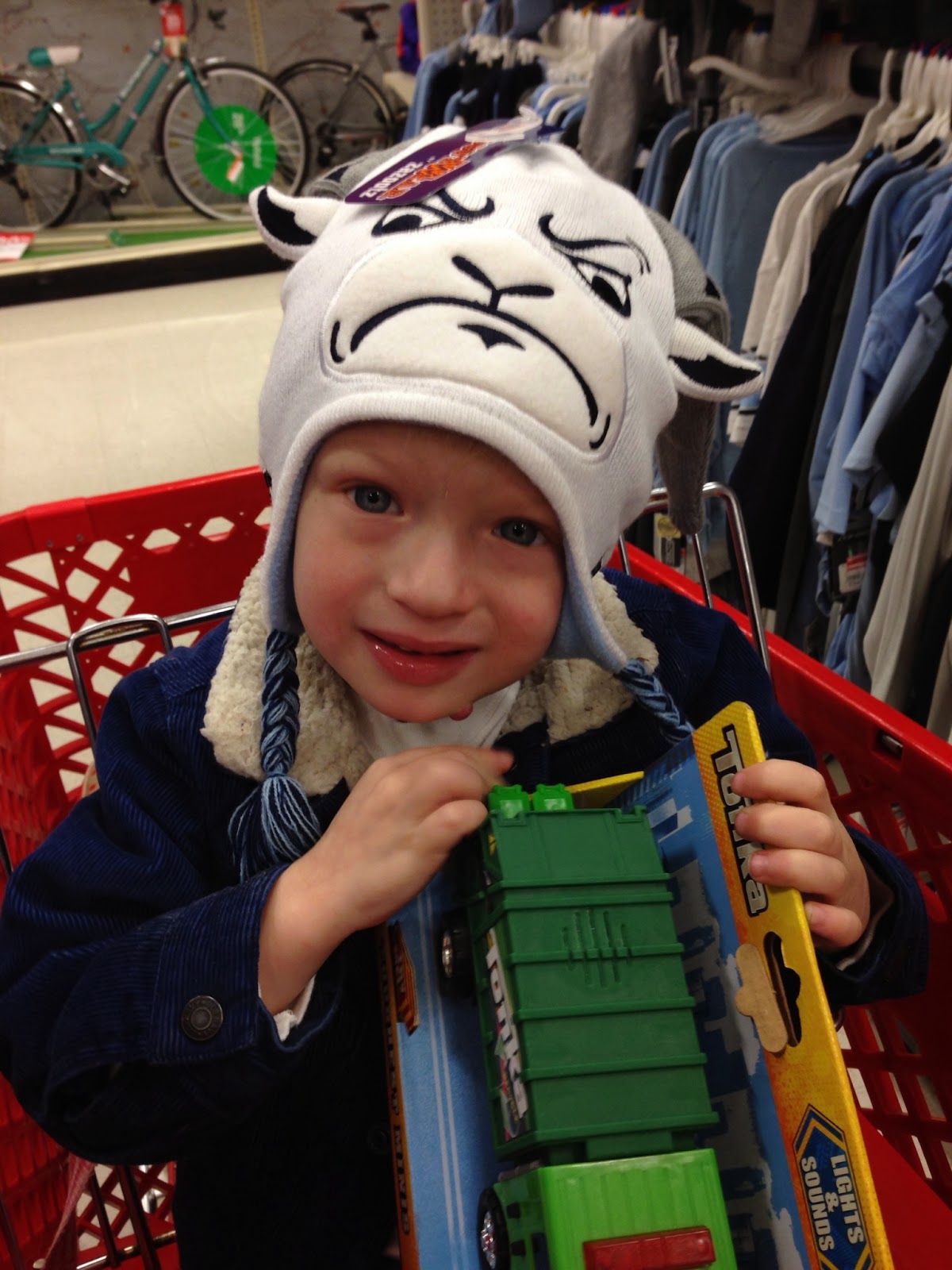 Josiah had his 3 year well-baby check today. No shots! Well, he would have gotten a flu shot if they had any available, but they did not. He is 37ish inches tall (he wouldn't stand up straight) and with a wet diaper and heavy wool on he's 28.4 lbs, so probably he's just under 28 lbs. He did well. No fussing. He's way beyond his milestones mentally, but physically there are a few things we need to work on. She (his doctor) wants us to work on him dressing himself, and using utensils more. I'm not that concerned with this because I figure at some point he's got to figure it out. Surely I won't be dressing him for high school. But we'll be working on it, definitely! She did not mention him not being fully potty trained and I know he's still well within the normal range for that. But we're working on that, as well!

So, what can Josiah do now that he's 3? Well, he knows the whole alphabet, of course. We're working on learning it backwards, even. He can spell a bunch of words but that's not reading, just memory. He knows what letters words start with and we can often sound things out together. He knows all his colors. He knows all the planets but he doesn't really understand what planets are. He'll say things like "Jupiter will not hurt me." He knows Pluto used to be a planet and we're a little sad that it lost it's planet status. :) He knows all the days of the week, months of the year, and all the states in alphabetical order. He can place most of the states on a map, too. Next we'll be working on capitals. He can count to 100 and then to 1 trillion by adding 0s (100, 1000, 10,000...). We're working on the smaller numbers after 100 now. He can add and subtract under 10 and that's not just memory because the other day I asked him out of the blue what cinco plus dos is and he thought for a second then yelled, "Siete!" Previously we had not worked on adding in Spanish so I think he "gets" the general concept.

He's not big on drawing or coloring and can't draw any letters or numbers except O, I, Q and 1s and 0s. I like to joke he's writing in binary. But honestly he's just not been interested in drawing anything much. Emmy (my mom) gave him some stamps for his birthday, though, and he loved playing with them tonight. He loves Play-Doh but this is a new discovery. We'll be playing with this more soon.

As for the potty, well, several times now he's told me he has to go, and then does! It's amazing, but it's not remotely consistent. We're not pushing it AT ALL. Again, I figure he won't be in diapers by high school.

Seeing your child struggling to do something is really hard and I know both Boomer and I have been guilty of helping him when we shouldn't have. Now we are being especially careful about never ever stepping in to do anything for him that he thinks he can do himself. Unless, of course, we're in a big rush. But in general we're both taking a step back and letting him do for himself. I imagine this previous "too much helping" accounts for a lot of why he can't dress or use utensils well. I guess if that's our biggest mistake we'll be doing ok.

He's a really funny kid. I'm guessing all toddlers are but he's the only one I live with. I mean, he cracks me up every day. Some of my favorite quotes and chats are here: http://firstpancake.tumblr.com/

Not to be too schmaltzy, but he's an amazing kid and I feel so blessed every day. Even days when he pushes all my buttons I feel blessed. Ok, those days I don't feel blessed until after he's asleep, but still. I just never knew I'd have such a funny, brilliant, beautiful little boy. Like the song says, somewhere along the line I must have done something good.
Posted by Unknown at 11:57 PM